First: This post has absolutely no point and I know LiveJournal is as dead as rocks, but I just wanted to start a convo and see if anyone here still exists.

Look, as a grown ass woman, I obviously don't think Twilight is the worst of the worst in existence (cough, Sarah J Maas' books are worse than Twilight because... so many reasons. They just annoy me, they're like.. smug when they shouldn't be. Idk how books can be smug, but they somehow are. Oh man. Anyway, moving on.) and I have a bit of a nostalgic adoration for the series now that over a  decade has passed since its craze.

But oh my gosh, what's with everyone suddenly defending it, claiming that people only disliked it so much because "it was made for teenage girls, and you just hate teenage girls, checkmate atheists".

Look, I get it to an extent. I personally remember hating it as a teenage girl myself back in 2008-2012ish because it gave me a sense of superiority and a "not lyke other gorls" attitude. As an adult, I laugh at myself for Twilight being the biggest issue of my time. Oh, how simple life was...

"Though I do tend to generally kill

Kill things that don't fight back..."

A discussion question: Will there be another Twilight in the future?  That is, a franchise this horrible will produce spinoffs?

We've already got some terrible stuff already in the past few years;

On the other hand, they were more direct spinoffs of Twilight or had Twilight's influence (the Host was by Meyer herself, and City of Bones was by a fan of hers)

The biggest Young Adult thing now is the Hunger Games, which, while I consider it a complete bore and quite terrible in its own right, doesn't have quite the impact or the sheer awfulness of Twilight

My question is, while that the Twilight series has been successful despite being hated by everyone with a brain, can this happen again? I know terrible books have had big followings like Gone With the Wind or Wuthering Heights and such, but I wouldn't call it the same phenomenon.

I guess what I'm asking is whether Twilight is just another a bad franchise and part of a larger cultural pattern (which would predict that this will continue to happen while the cultural paradigm exists), or if it was something especially unique, and if the latter is true,  can it happen again?

Can Stephenie Meyer can do this? 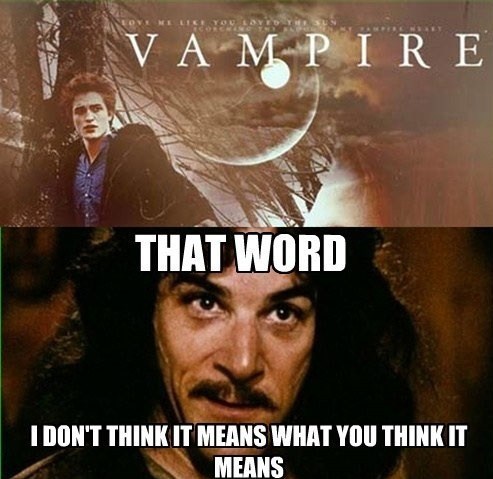 
Oh, come on...you KNEW that this film would get TONS of razzies!

While browsing through some of my lols I saved to my computer that I made for fun, I discovered one that I made for Blecklight, and something in my head whispered "post it! POST IT!, so...um....please don't hate me too much for the silliness... >.>  <.<

(Bonus points for this coming from the MST3K and Rifftrax guys.)
Collapse